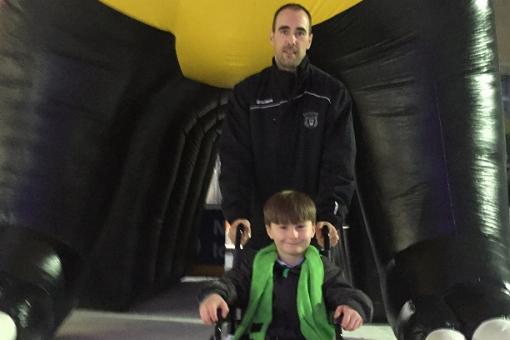 The first of the new style school visits took place today with 300 kids from five schools visiting to watch training and then skate with the players. And the new style schools programme proved a massive hit for everyone involved. in previous seasons Panthers have sent players to school visits, often twice a week, to spread the word about being healthy, looking after each other, behaving and working hard. This year with co-operation from the National Ice Centre and working with the Blue Bell Hill Trust we've flipped it around and the youngsters came to us instead. We also help from the Loughborough School of Business and Economics. The kids will be back with their parents to watch a Panthers game in the future as guests of the new-style programme but in meantime everyone had a great time and they all took home a certificate to say they'd skated with the Panthers. Eight-year-old James Marshall from Woodthorpe was in danger of missing out on the fun with his class mates after he broke his leg in two places falling from his stunt scooter the day after his birthday at the start of the month, but we made sure he got involved and Panthers' captain Brad Moran grabbed his wheelchair and took him out on the ice alongside the other kids from Arno Vale Juniors and the other four schools at today's event.