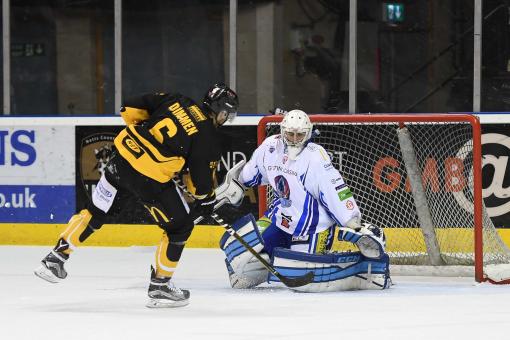 GMB Nottingham Panthers has told his troops to stay away from the ice, work out in the gym, and get some rest from the sport. Panthers have no mid-week games this week and the coaching staff are confident a break will do them good. Guys looking to get back from injury will still be taking to the ice during the week but full practices are off the calendar for two or three days. Coach Neilson revealed the plans in our latest exclusive interview on Panthers Radio (with Xynomix) where he also spoke of his pleasure at seeing the side be "prolific offensively ...and create lots of 'grad A' scoring chances. Meanwhile, Jeff Brown is on Panthers TV with the GMB and he revealed a pre-game meeting with the players after Saturday's loss in Cardiff had sparked a determined approach to Sunday's victory over Coventry. And he said "When we get a lead, we're a different team." Watch and hear the two interviews right now. Just click on the links on the right. Panthers beat Coventry 8-3 with the game over and done with early doors. Robert Farmer, Jeff Dimmen and Brian McGrattan all had two goals each with the other scores coming from Brad Moran and Jeff Brown.