Nominate a player for the fan awards- win a prize! 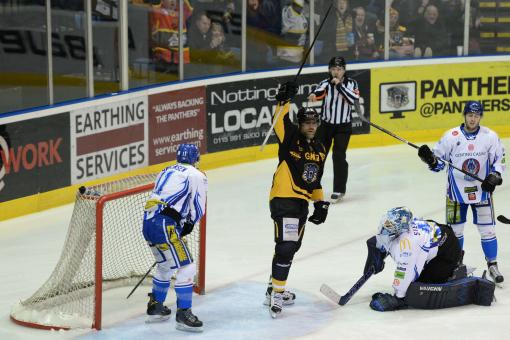 Last week, we opened our nominations for fans’ player of the year and most entertaining player of the year. We have already had over 650 responses and the race for the top spots is incredibly tight. It's not just the players who could get a prize if you nominate them though. You could too! If you fill out the survey, you’ll be entered into our draw to win some incredible prizes. At the beginning of each week the survey is open, up until the 20th of March, we will announce a new winner. This week you could win a signed puck by #13 Brian McGrattan, fresh off an epic tilt last night with the Giants’ Vandermeer! In the coming weeks, there’s a prize that money can’t buy coming up for grabs. The GMB Panthers are hosting a film premiere at the DeVere East Midlands Conference Centre on the 20th March, and you could join us! The film is a behind the scenes look of the Panthers European adventure at the Continental Cup Final, made by the fantastic crew at Lace Market Media. It will be a red-carpet affair with Panthers players, sponsors and some sporting celebrities joining us also. There’s currently no plan for the tickets to go on general sale, so filling in this survey could be your only way to join us at this incredible event. You can nominate your player by filling in this questionnaire: https://goo.gl/forms/NSkLfxmMcAEYyeg83 We aren’t saying when that prize will be up for grabs, so fill in the questionnaire now so you don’t risk missing out!