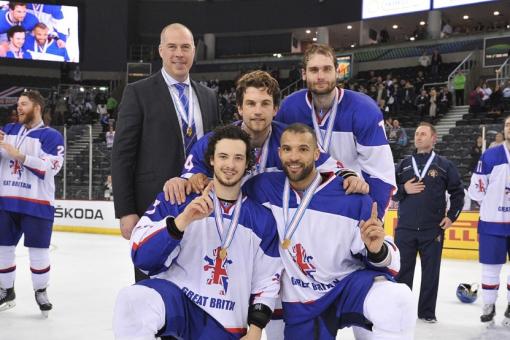 Panthers' forward David Clarke says a close team bond was one of the reasons behind Great Britain's promotion to the World Championship Division 1 Group A. GB produced a final-day 4-0 victory over Japan at Belfast's SSE Arena to earn their first promotion since 1993. "The Great Britain team spirit is always fantastic, but this year has been something else," said Clarke. "We all get on so well together and love each other's company. "We go out there and give everything we have for each other and it is so special to be a part of. We played so well today and took it to Japan from the off. It was five brilliant performances this week and we just kept on going. This is a moment to cherish and one I will remember for a long time. It is one of the best moments of my career.” The Panthers' five who bring home gold medals were coach Corey Neilson who rejoined the GB staff this season along with Clarke, Robert Lachowicz, Robert Farmer and Steve Lee. Pic: Dean Woolley