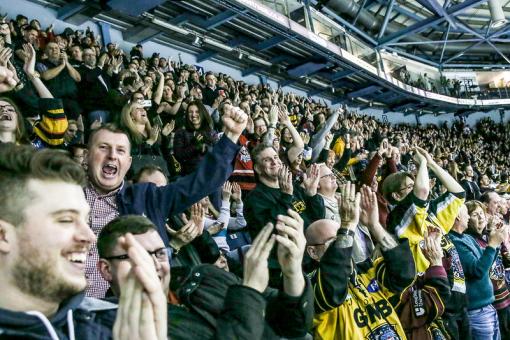 There are now only twenty so-called "sightline seats" available in the bowl at the arena for the Panthers-Blaze clash on New Year's Eve at three o'clock. And that means the game is officially classed as a "sell-out" in the bowl and that's the first time we've had back-to-back home sell-out. A clutch of sponsors returns and some unsold seats in the away block went on sale at noon today and were snapped up in less than an hour. With the game at Sheffield also selling out and the game at Coventry also reaching capacity it means Panthers will have played in front of four sell-out crowds in a row by the end of the New Year's Eve clash. The last of the "sightline seats" are on sale now from the box office. These are still good seats but sometimes need a bit of leaning forward to see the far corners of the ice. Most of what's left are in singles though but there is one short row available at the time of writing. Panthers are at home on Bank Holiday Monday too when the Hogmanay game sees the Edinburgh Capitals visit for a four o'clock face-off. Tickets for that game are available. THANKS FOR YOUR SUPPORT!!!!!!