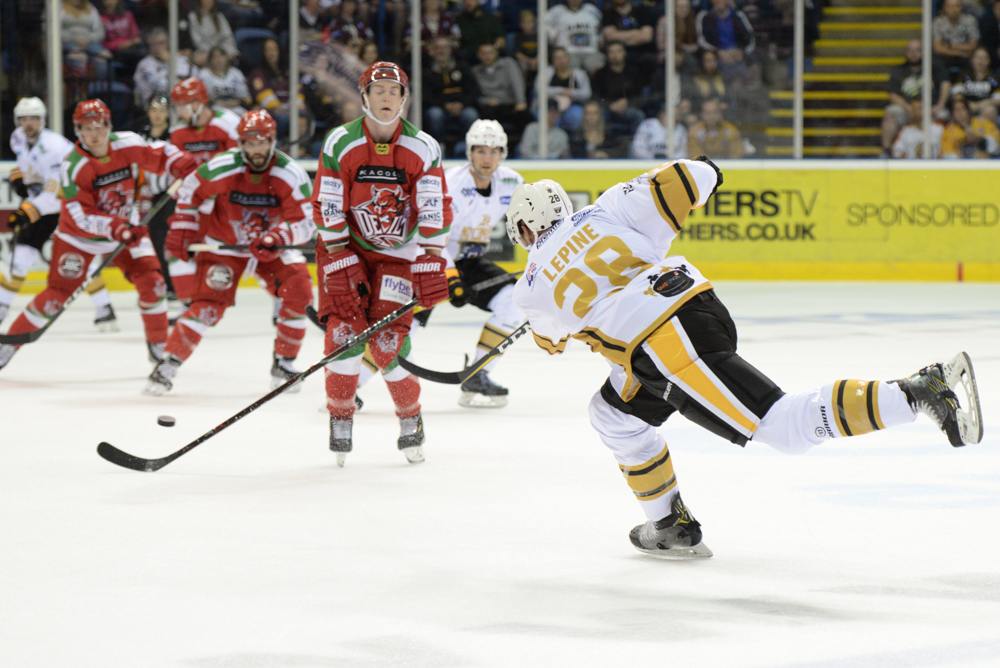 Ice hockey returned to the fabulous Motorpoint Arena on Saturday evening as the double winning Cardiff Devils came to town for an Aladdin Cup pre-season match-up.

After a raucous reception for the home team the opening minutes saw The Nottingham Panthers constantly retain possession, earning themselves a powerplay as Joey Haddad was sent to the box for hooking at 1:10 of the first period.

Despite raining shots on goal the Panthers could not find a way past Murdy in the Cardiff goal during the powerplay, and shortly after the Devils took the lead with Haddad scoring a one timer on his off wing following a defensive breakdown.

That setback did not deter the Panthers and after yet more pressure around the Devils goal Alex Guptill sent the puck east to west onto the tape of Dylan Olsen, who subsequently found Tim Billingsley between the hashmarks and he made no mistake as he sent the puck into the roof of Murdy’s goal to tie the game at one at 9:07.

Just over four minutes later the Panthers would take the lead after Jon Rheault stole the puck behind the net and fed a wide open Luke Pither in front who unleashed a wicked wrist shot over the blocker of the Devils netminder at 13:26.

Following the goal Cardiff came back into the game getting more shots on Michael Garnett's goal, rattling the pipes on one occasion.

As the period wound down Matt Pope sent the puck up and over the glass for a delay of game penalty, which gave the Panthers their second powerplay of the night at 17:45.

A breakdown on the blue-line saw Morisette break in one-on-one with Garnett but he made a world class split pad save, after which the Panthers journeyed up ice with Alex Guptill and Robert Farmer combined to give Justin Kovacs a virtually empty net tap-in for a 3-1 scoreline at 19:42.

A period of Cardiff pressure ended without incident as the second period got underway but the Panthers kept them to the outside, with any shots blocked before they reached Garnett.

Some scrappy play followed as the puck was iced and chipped out of play on numerous occasions and then the Devils took advantage of a bad bounce as Rutkis went in one-on-one with the Panthers netminder, he would make no mistake as he put the puck into the net to make it 3-2 on the night at 24:01.

Some good work by Jon Rheault saw him get tripped up by Haddad at 28:47 and just 16 seconds later Luke Pither would score his second of the night, this time on the powerplay, at 29:03.

More good work from Rheault and Lachowicz saw the Panthers head back to the powerplay as Piggott took an interference minor at 32:04.

Great vision from Mark Hurtubise would see him find Brett Perlini on his off wing but Murdy in the Devils goal stood tall to deny him as the powerplay wound down.

Two more Devils penalties as the period came to it's end would ultimately come to nothing despite heavy Panthers pressure, with Murdy denying Farmer, Guptill and Lepine in quick succession.

Sam Gospel took over from Michael Garnett in goal for The Nottingham Panthers at the start of the third period and at 41:32 a shot from the blueline found it’s way through the young British netminder.

Powerplays continued to come the Panthers way but despite plenty of endeavour they couldn’t get the puck past Murdy in the Devils’ goal.

The Devils would tie the game up at 47:16 as a horrible bounce off the boards gave Cardiff a gaping cage to score into.

Shortly after Cardiff would take the lead with Bentivoglio scoring off the rush at 49:53.

With both teams tiring the third period headed to it’s conclusion without futher incident until Alex Guptill gathered the puck and fired home unassisted tying the game at five at 58.52.