PANTHERS BACK ON THE TELLY TONIGHT 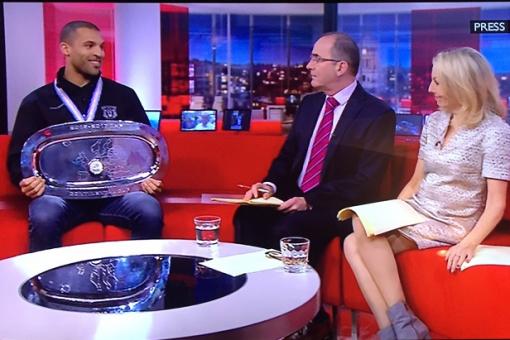 The GMB Panthers' European success was featured on the television again tonight when the team's British contingent parades the trophy and their medals on East Midlands Today while ITV Central carried goals and interviews from today's training session too. There are articles in papers in North America and Australia today as well as widespread radio and other media coverage. Interest through social media, this website and others runs into millions of hits. A club spokeswoman said this afternoon: "The news has spread far and wide. The captain on the flight home announced he had the Panthers on board and there was a spontaneous round of applause, our general manager had a quick turn-around after the team got back in the early hours of yesterday as he attended a league meeting where the club's European success was also greeted with another round of applause. Panthers have achieved something special and it's catching everyone's attention." Watch the Continental Cup trophy being presented again on home ice after the game this Sunday versus Fife. Tickets now on sale.