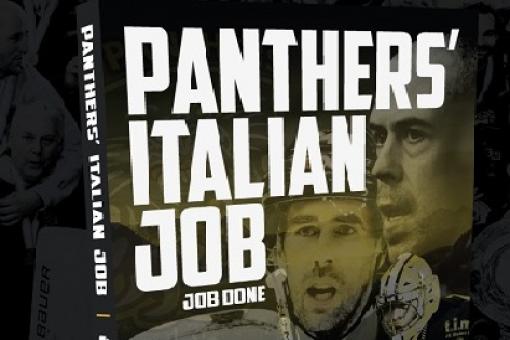 The book of the Panthers’ European adventure in the Continental Cup 2017 has gone word-wide after it was released on Amazon Kindle in dozens of countries across the planet. Seventeen teams from across Europe embarked on the quest to become champions, only one would succeed. After beating the opposition in tournaments in Denmark and Spain the spotlight fell on the Super Final in Italy. No team from Great Britain had ever lifted a European title before. With over ten thousand miles traveled, a team from Kazakhstan, another from Denmark and the Italian hosts, stood in the way of the Panthers defying the odds as the lowest ranked team still in the tournament and a history-making success. The story of that journey, from inside the camp, was brought to life by general manager Gary Moran who traveled with the team every inch of the way as they won their fourteenth and arguably biggest trophy in the last ten years. With locker room humour (parental guidance recommended) and a writer’s keen eye for the unusual his account of the adventure has already won rave reviews in its original book format. Now it is available as a e-book on the Amazon Kindle platform. Search the title or the author on Amazon and delve into a story that has been described as a must read for any hockey fan and any sports’ fan. And if you want the hard copy, the last of the stock is still available from the shop at the arena or the Panthers' office.