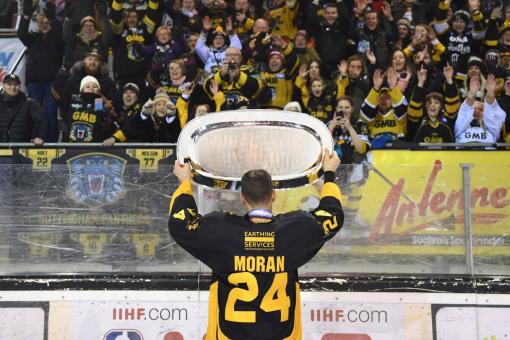 Brad Moran has decided to call an end to his impressive hockey career, after helping guide the Panthers through their history making campaign. A key part of the Panthers team that won the Continental Cup, Brad pulled in 15 points in those nine games as the GMB Panthers completed their European victory in Italy. Called on to become Captain in just his second season as a Panther, Brad had the respect of the entire locker room, as shown when he was voted Players Player of the Year at the awards night. Having spent his two years with the Panthers also at Loughborough University Business School earning a degree, he felt this was the best time to call it a day on his career. When speaking to the club, Brad said “I have thoroughly enjoyed my two seasons as a Nottingham Panther. As it often goes with hockey, we get settled in as a family and then it is time to move on to something new. “Although this season didn't end as I had hoped, I will always remember the 3 Championship trophies we won over the last 2 seasons. I am grateful to the Panthers organization for the opportunity to play here to end my career.” Moran also had some kind words to say about the fans in Nottingham: “I would like to thank the fans for all the support as well. Having played all over Europe I can attest that their passion and knowledge for the game can compete with fans from anywhere. “It was truly a pleasure to play in front of them and for the Panthers.” A club spokeswoman said “Brad Moran is the ultimate professional and we are very proud that he’s ended his excellent career as a Panther. “We wish him and his young family all the best in their future endeavours.” Brad has also spoken to Panthers Radio so listen to his final words as a Panther here: http://panthers.co.uk/sites/default/files/Brad%20Moran%20Retirement.mp3