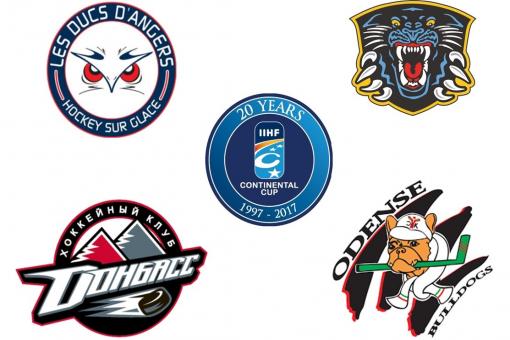 The Continental Cup played host to another successful weekend of ice hockey for the Nottingham Panthers as they became the first British team since the 2009/10 season to make the Super Final of the competition. A #3in3 against very tough opposition in the Odense Bulldogs, the hosts of this round of the competition, the Angers Ducs and HC Donbass was an intimidating prospect for the GMB Panthers. But with the top 2 of the group going through, the Panthers stood as good a chance as anyone of booking their place in the Super Final. The competition opened for the Nottingham team on Friday night as they took on the hosts, Odense Bulldogs. An exciting game of hockey saw the Panthers come out 5-4 winners over a very competitive Bulldogs side. Panthers held a 4-2 lead going into the third period after goals from McGrattan, Moran, Carter and MOTM Petr Kalus. Miika Wiikmna had to be pulled out of the game after being run down in the nets and Henry Pacl made his first appearance of the weekend. The Panthers earned a 3 goal lead early in the third but Odense made the game tight when punishing a give away and pulling their netminder for an extra skater. A tense final minute ensued but the GMB Panthers held on for the win. Saturday saw the Angers Ducs, who had beaten HC Donbass the day before, take on the Panthers in a game that could see the Panthers top the group after just two games. The French side opened the scoring on a fourth minute powerplay to put the boys in black and gold on the back foot early but a well worked goal put away by Jeff Brown got the Panthers back on level footing. That tie didn't last into the second period though as Angers capitalised on yet another powerplay to regain their one goal lead. Fortunately, a strong second period saw the Panthers head into the third with a one goal lead thanks to effort from Moran and Kudroc. By the end of the game, the Panthers had endured yet another tense finish but seen out the 4-3 win. Due to the tiebreakers involved, this meant the Panthers booked their spot at the top of the group and progressed to the Super Final for the first time in their history! This made Sunday's game a dead rubber tie meaning Corey was able to rest a few players, meaning the Panthers only played with three lines. The Panthers were beaten 3-1 by HC Donbass thanks to their fresher lines but it didn't matter in the end. Odense beat Angers on the Sunday also to ensure their progress to the Super Final and they will both be joined by Ritten and Beibarys Atyrau. This massive event will take place between the 13-15 January 2017 with the host still to be announced. So why not celebrate the return of the victorious Nottingham Panthers by cheering them along this weekend as they take on Belfast and Fife in EIHL action. Tickets are available through 0843 373 3000 to book, or you can visit the box office open now until face-off. Finally you can book on line by clicking the link: www.motorpointarenanottingham.com/online/Panthers