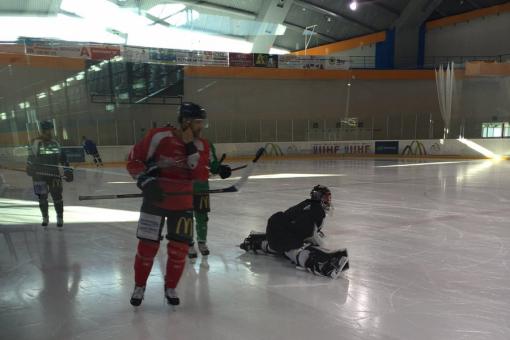 The GMB Panthers arrived in Jaca safe and sound yesterday evening, with enough time to get on the ice for a while and everyone was in high spirits upon arrival after the long journey. Captain Brad Moran said "the boys had a comfortable trip and now that we're in Jaca, we're just excited to get back to playing hockey." This weekend will see the Panthers take on opposition from Jaca, Istanbul and Liepaja over three days in an effort to get through to the next round of the competition. In injury news, there's some light as Steve Lee could be set to make his return this weekend. He's been skating a little throughout the week and is just about ready to pull on a Panthers strip again. However Christopher Lawrence and Steven Schultz have remained in Nottingham to work with the medical team on their recovery. The competition delegates meeting also took place last night, as well as a referees and coaches meeting, meaning the tournament is ready to go ahead. The opening game of the round takes place tonight at 1900 GMT against Club Hielo Jaca.