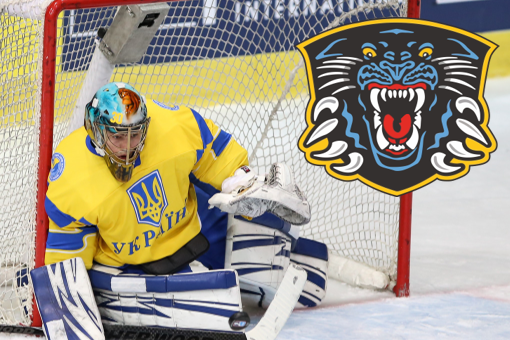 The GMB Nottingham Panthers have put a contract in place with Ukrainian national team netminder Eduard Zakharchenko. At 21-years-old he has been highly rated and whilst he could be seen as ‘one for the future’, short-term he is also expected to have an impact in the Elite League. Said head coach : “He’s going to be good. We’ve talked about having three goalies again with two ‘imports’ and Sam Gospel on the books. “Having Henry (Pacl) last year gave us a chance to rest our number one along the way. “We’ve got another long season ahead and I see Eduard playing a big part in it, firstly by pushing the other netminders and secondly by playing in and winning games for us. He’s keen and he can’t wait to get here. “He earned great reviews with his national team and his club side last year, I’m confident he will do well with the Panthers. "Henry became a big fans favourite. He was homesick by the end of the season and we wish him well. He set a trend and I’m sure Eduard is going to grab this opportunity and make it work both for himself and the club.” He’s six feet one and catches left. With the Kremenchuk club last year he had a goals per game average of less than one-and-a-half and a save per-centage of just under 95 percent. At the recent Division 1A of the World Championships (the level to which GB has just earned promotion) he had a save-percentage of 94.3. Visa paperwork can’t start until next month and will be completed as quickly as possible after the applications can be submitted. Photo Credit: IIHF