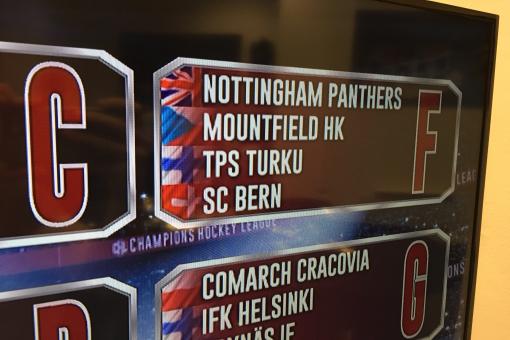 The GMB Nottingham Panthers have been drawn against some tough opposition in the Champions Hockey League including Swiss Champs Bern and top Czech and Finnish sides Hradec Kralove and Turku. The games starts on August 24th. Panthers preparations start with pre-season action at home on August 12/19 and 20th. The groups were drawn at a special ceremony in Cologne today. We’ve got reaction on Panthers TV and Panthers Radio. Head coach Corey Neilson Said of the draw: “Big clubs, big games, we knew that was going to happen whoever came out of the hat. They’re the overdogs, we’re the underdogs. That was always going to be the case but we’re not in it to just make up the numbers . We surprised teams in the CHL three years ago and that’s our plan again this coming season. The match-ups are fascinating and everyone in the Panthers’ organization is thrilled to be involved and thrilled to be able to bring some of Europe’s best teams to the City of Nottingham.”