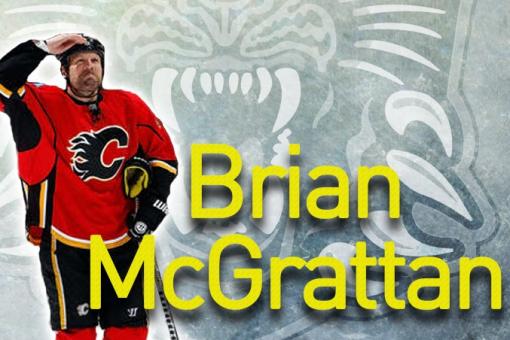 The GMB Nottingham are pleased to announce that Brian McGrattan has agreed to join the club. Paperwork came through overnight and work on the visa side of the signing is already underway. The 6’4” Canadian will be with the club as soon as possible. Originally from Hamilton the right winger was drafted by Los Angeles in 1999 and has played in the NHL for Ottawa, Phoenix, Calgary and Nashville. In all he has 317 NHL games on his resume and has taken 609 penalty minutes in the show. He also has 336 games in the AHL on his CV and a further 1,379 minutes. He won a championship in juniors and was the AHL most penalized player (551minutes) in 2004-5. Last season he had nine goals and eight assists (and 144PiMs) at San Diego Gulls in the AHL. Panthers’ head coach Corey Neilson couldn’t hide his delight at the player’s decision to join the Panthers: “This is the final piece we’ve been waiting for. These things don’t happen overnight, management have been supportive throughout the process and it has paid dividends. “I think the fans will love this guy. It was a vacancy we weren’t expecting to have to fill but things happen in sports and problems become opportunities. “Brian is very eager to get over and meet the guys and the fans. “We wanted to sign a player with this kind of reputation for the fans. We’ve got our man.” Pic: Calgary Flames