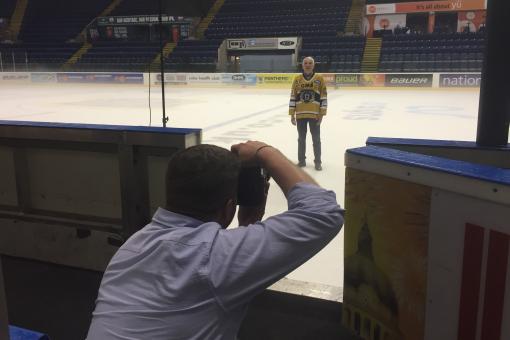 An article looking at superfans of sports across the UK saw The Guardian head to Nottingham to meet the Panthers' own John Styles. The Guardian first got in touch with John in June after hearing about something quite spectacular: His jersey collection. A fan for nearly two decades John's collection is the envy of many in the Panthers Nation, with it spanning nearly a hundred jerseys from throughout Panthers history. In the photoshoot, John wore his favourite of the lot, a gameworn Miika Wiikman jersey signed by the entire squad. He also changed into a signed Evan Mosey CHL jersey. The Guardian sat down with him to ask him about his collection and what it was about Ice Hockey and the Panthers that saw him become such an avid fan. If you want to read more about John and superfans across the UK, keep an eye out for a copy of The Guardian Weekend Magazine, out tomorrow.