Panthers train in Odense ahead of Continental Cup 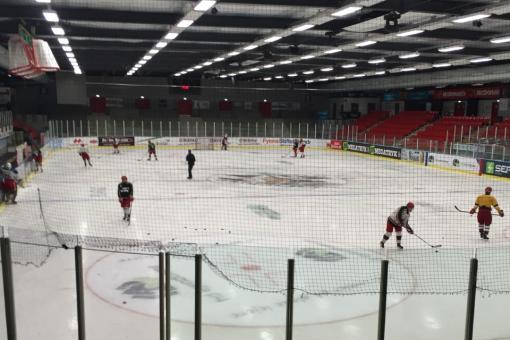 The GMB Panthers were on the ice in Odense this morning ahead of their first game of the weekend against the hosts tonight. The team were involved in the rules and regulations meetings last night after a straight forward journey to Denmark. Petr Kalus has travelled with Panthers for a swan-song weekend. He is still registered with Panthers and wanted to play ahead of his departure. With Panthers still carrying a number of injuries it made sense to include him at the registration meeting. Two of the four teams progress from this weekend to the grand final in January. Head coach Corey Neilson and his off-ice team have drawn up game-plans aimed at winning progress:"We are confident of winning games. "Our domestic form had an upturn and then a downturn last weekend and these Continental Cup games give us a chance to show what we can do with one or two more bodies in the line- up. "It won't be easy and some guys are still very much less than a hundred per cent but spirits are good." Panthers and Odense are joined by teams from the Ukraine and France for the three day tournament.