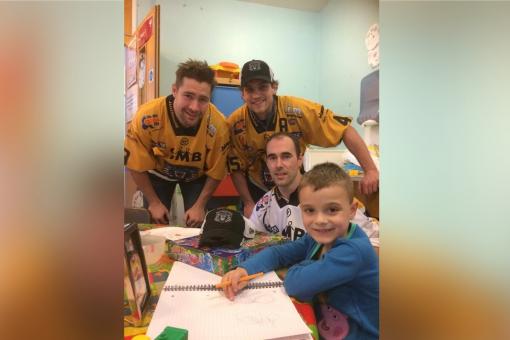 Yesterday, 4 members of the Nottingham Panthers squad went down to the QMC Children’s ward to deliver presents to poorly children from across the region. The presents were donated by generous members of the #PanthersNation and were a huge hit with the children in the ward. However, the kids were most excited by the arrival of some of their favourite GMB Panthers. Brad Moran, Ollie Betteridge, Stevie Lee and Logan Macmillan were on hand to fulfil a lot of Panthers fans dreams just before Christmas time. And for one fan whose favourite player wasn’t there, Ollie Betteridge was on hand to help out. Joe Shacklock, aged 6 from Woodthorpe, is a huge Robert Farmer fan and he was able to chat to his hero on FaceTime while in hospital. There were loads of other kids who were over the moon with getting to meet their heroes and we spoke to the players upon their return. Stevie Lee said “it was just incredible to be able to give back like that. Those kids are going through a really tough time and being able to put a smile on their faces made our Christmas’”