PLAY OFF FEVER - SHIRTS ARRIVE IN NOTTINGHAM – ticket update too 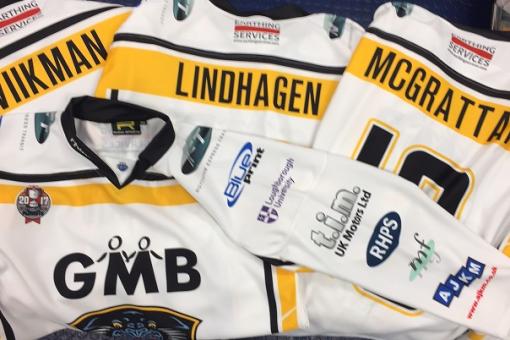 The league issue Play Off shirts have arrived at the Panthers’ locker room today ahead of Saturday’s big clash with the Sheffield Steelers. The biggest of rivals will be battling it out for a place in the grand final and it all starts in Nottingham on Saturday at 7pm. Both sides have lost key players due to injury with Matt Carter of Nottingham and Mike Ratchuk of Sheffield ruled out for the play-offs. Both sides carry ‘spare’ imports and are expected to be at full-strength. Play-off hockey is always spicier than regular season hockey but a Panthers-Steelers clash in the Play Offs takes it to a new level. Ticket sales were fast and furious when they opened on Monday but they have calmed down a bit since then and there are still well over a thousand seats available in the bowl at the arena. Panthers are out leafleting today and they’re urging their fans to spread the word – it’s the Play Offs, it’s Panthers versus Steelers, it’s the biggest home game of the season, it’s one not to be missed! The box office is open daily from nine ‘til nine, you can call 0843 373 3000 or you can click on the link on the right and buy on line. SEE YOU THERE! THE LOUDER THE ROAR…THE BIGGER THE SCORE!