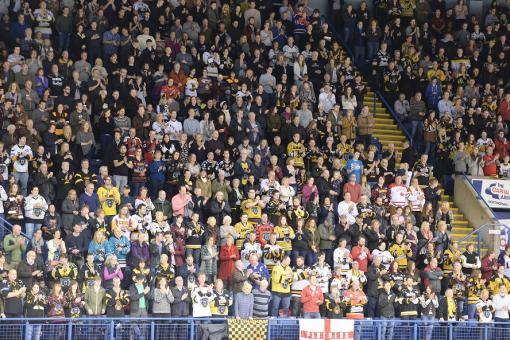 The Playoff Quarter Finals are upon us and it sees the Sheffield Steelers and Nottingham Panthers clash in Nottingham tomorrow with the away leg 24 hours later in Yorkshire. It will be a huge night of action and there's lots going on off ice too with a special shirt raffle which features not one but six game-worn prizes from the regular season. A former Panthers legend retires and there's a special presentation before the game. There's a brand new one off special edition of the match magazine and loads more going on. Tickets for the game are still available. We had to wait until the final buzzer of the season for league seedings to confirm Panthers would face their biggest rivals in the play-offs.the biggest rivalry in the UK was on. The Steelers have the edge on the head to head results but the games have been very hard to predict this season with both teams taking wins’ home and away. The players are excited about the games catch up with their reactions non Panthers Radio with Xynomix and on Panthers TV with the GMB. Watch and hear them right now, just click on the links on the right. Tomorrow's game is sponsored by Neville Precision Engineering and face off is at 7:00pm They were part of our player Platinum sponsors team this year and won the game rights is a spcieal draw for Platinum sponsors. We’re down to just over 1000 Tickets so don’t risk disappointment and get yours now: https://goo.gl/ns4oay The Ice Locker still have their 10% discount for Season Ticket Holders Saturday, on all their merchandise! The special edition of the match magazine will be on sale! Get it tomorrow for just £3!! The book of the European ad venture will be available again at the special price of just £10. PANTHERS’ VIP desk, sponsored by East Midlands Trains is on LEVEL THREE…that’s one flight of stairs up from the foyer and one flight of steps down from the hospitality boxes. Follow the signs to the Panthers’ VIP desk if you need to see us at the game. <><><> A night with the Panthers can be more than just a visit to a sporting event. The games are staged inside the fabulous National Ice Centre. We have parking deals lined up at the Broadmarsh. It’s cheap on a match by match basis for fans & for more information e-mail parking@nottinghamcity.gov.uk Adult season ticket holders can get a meal deal special from McDonalds in Nottingham all week long (after 10.30am). After every home game the Panthers' players will be eating meals from Pizzeria Savai, close to the arena. Fans can use their match tickets or Panthers season tickets to take advantage of a “Buy One Get One for half-price” deal at Pizzeria Savai on game days. Match and season tickets can also be used on the Nottingham trams network to get into the game with £2 return tickets. The fifty-50 draw is brought to you in association with Temple Printing. A £1 ticket could win you hundreds or more... You’ve got to be in it to win it! The more tickets you buy – the bigger the prize! The shop and the merchandise stalls on the concourse carry a full range of official Panthers branded goods. These are the ONLY legally sanctioned merchandise outlets. <><><> Even at this stage of the season we have lots of new fans joining us. The crowds have grown week on week all season long again. To help them get more from their visit we have a newcomers guide to some of the rules for the fastest team sport in the word: The rule book is hundreds of pages thick but there are some basics that help newcomers understand what’s going on around them. To start with, its five skaters and a goalie per team. Two skaters on defence, three up front. If the ref gives a team a penalty then the offending player sits in the penalty box. If an opponent takes a penalty at the same ti