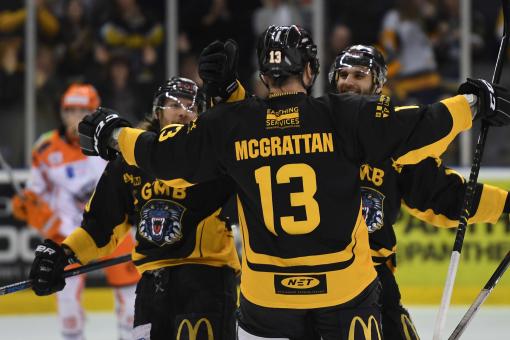 The GMB Nottingham Panthers' locker room was in positive mood after the 5-4 win over Sheffield on Saturday night. With a massive crowd cheering them on Panthers held off a concerted Steelers comeback for the win. Brian McGrattan spoke of the support when interviewed on Panthers TV with the GMB. He also believes the win will stand Panthers in good stead when they travel to Sheffield for the second leg of the cup semi-final (trailing by a single goal) on Tuesday next week. Watch and hear him right now, just click on the link on the right. Meanwhile, head coach Corey Neilson gave his reaction to Panthers Radio (with Xynomix) : "They were flat coming out and we were very good in the first period......we lost our way in the second but we got our goal early in the third and defended very hard." Hear his thoughts right now, just click on the link on the right.