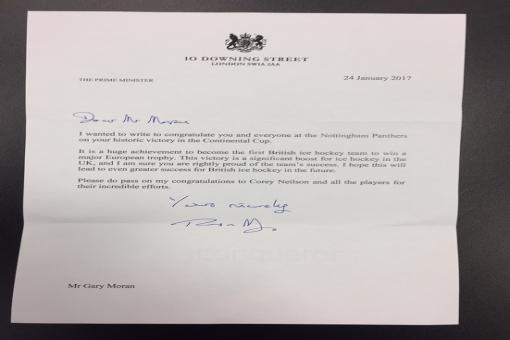 Prime Minister Theresa May has added her congratulations to the Panthers for their stunning win in the Continental Cup. The PM has written to the club "to congratulate everyone at the Nottingham Panthers on your historic victory". The letter - signed by the Prime Minister - goes on to describe the Continental Cup Championship success as a "huge achievement" and a "significant boost for ice hockey in the UK". Meanwhile, the plans for a Civic Reception by the Nottingham City Council to honour the Continental Cup victory are moving on at a pace and the event will take place at the Council House on the evening of Tuesday February 7th.