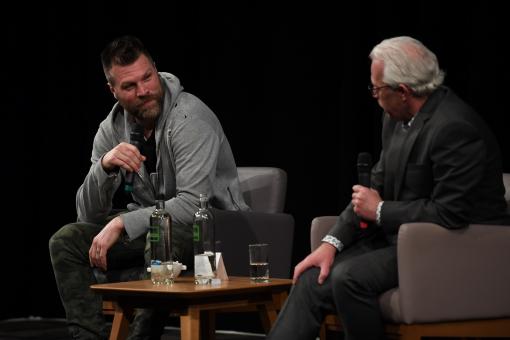 The first of this week’s two movie and chat-shows featuring Brian McGrattan in ICE GUARDIANS for fans takes place tonight at the East Midlandsa Conference Centre on the Nottingham University campus. Last night sponsors and invited guests enjoyed a preview showing and the reactions have been fantastic to both the movie and the film. The show starts with a short preview trailer of an upcoming Panthers’ film by film maker Jake Cauty which was well received. Ice Guardians takes a detailed look at the role of the “enforcer” in hockey and is a brilliant insight into how hockey works. The event then concludes with a chat with one of the stars of the movie Brian McGrattan, who was honest, open and revealing in his post screening chat prompting comments from the audience such as “brilliant”, “a great night and one not to be missed by anyone who likes ice hockey” and “one of the best things I’ve ever seen, the chat was incredible!” The whole event will be re-staged for fans tonight and again on Friday. Both shows start at seven o’clock. There are some tickets still available, contact info@panthers.co.uk or call 01159413103 to book. It may be possible to pay on the door but it would be best to contact the office first to check. SEE YOU THERE!