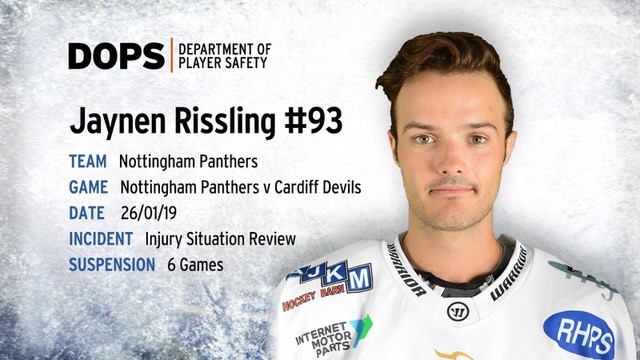 THE NOTTINGHAM Panthers defenseman Jaynen Rissling has been handed a six game by the EIHL DOPS.

Midway through the third period, Jaynen laid a hit on Devils forward Evan Mosey that was reviewed and deemed a check to the head.

After reviewing the footage, the incident was deemed category 2- 'Reckless'.

His punishment was increased due to having been classified a 'repeat offender'.

The DOPS breakdown of the incident is included below.

Layne Ulmer of the Cardiff Devils received a three game ban for leaving the bench to engage in a fight with the Panthers' Jaynen Rissling.

This means Jaynen will miss two games against both the Belfast Giants and Sheffield Steelers, as well as a game agains the Milton Keynes Lightning and the second leg of the Challenge Cup Semi FInal against the Guildford Flames.

After review of the video footage, it has been determined by the EIHL DOPS, that supplementary discipline is required. The incident is deemed as Category 2 – ‘Reckless’ – a deliberate and/or dangerous action with no concern for the result, with a conscious action to provoke, through intent and a wilful purpose. Injury is not the determining factor, but can be considered as an influential means to the decision.

With play moving into the Cardiff Devils' attacking zone, and Cardiff player #47-Jake Morissette in possession of the puck, a set up play ensues. The play includes #47-Jake Morissette holding up above the hash mark to attempt to draw the Nottingham Panthers' defenseman in. The play opens up the ice for the Cardiff Devil player, #23 Evan Mosey coming in from the high side, to the slot area and receiving a pass from the top hand side. This leads to #23 Evan Mosey having to have a split second wait for the puck to gain possession, and for his sight line and attention to momentarily switch to the puck. At the same time, from the opposite side of the ice, Nottingham Panthers' #93 Jaynen Rissling is approaching at a high rate of speed to make a check on #23 Evan Mosey.

Considering the incident at full speed, it is important to note that from the pass to #23 Evan Mosey to the body contact by #93 Jaynen Rissling occurring is just over one second. With time, space and speed all taken into consideration, it is felt in the opinion of the DOPS that #93 Jaynen Rissling did not have time and was not deliberately or intentionally making a body check with head contact. However, in all incidents, when an illegal action occurs that is avoidable, the responsibility is on the checker to avoid head contact.

It was also taken into consideration that during the 2018/19 EIHL season, #93 Jaynen Rissling is a repeat offender for contact to the head of an opposing player.