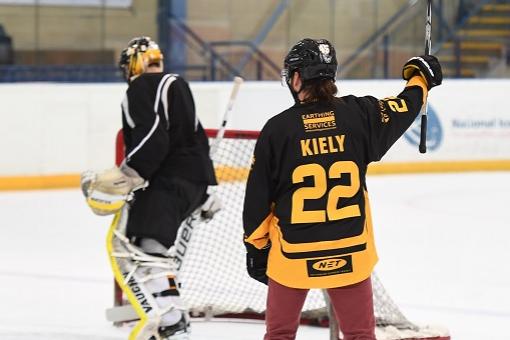 Top Canadian rock band Monster Truck were at Panthers' training today. The band are hockey fans from Hamilton and are well known for their song The Enforcer which is included on Panthers' match night play list and is featured on lots of NHL coverage and in the film Ice Guardians which in turn features Brian MacGrattan who also comes from Hamilton. Panthers will be guests of the band tonight when they support Nickleback at the Arena. The band were presented with their own Panthers' shirts at training today and they joined in the on-ice action too. The media were out in force to meet them and we've got a radio interview up and running already (click on the link on the right) and a piece live on Panthers TV (also available on the right of your screen). You can also find the Panthers TV piece on our Youtube channel by following this link: https://youtu.be/Xo1uzOW1x-4 Panthers' captain Brad Moran said after the session today: "They were great guys and they told us they had a great time. Now everyone is looking forward to seeing them on stage tonight." Pics Karl Denham and Adam Gouldson