Schultz can't wait for second game back from injury on Sunday 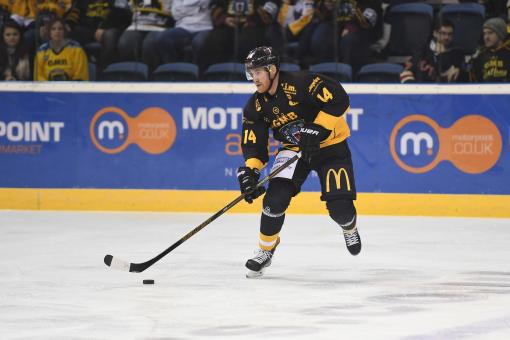 Stephen Schutz returned to the line-up this weekend and says he can't wait to get back out on the ice again when Fife visit Nottingham on Sunday afternoon. He was back ahead of schedule after being injured at the start of October and on Panthers TV with the GMB he praised his team mates for continuing to battle in all competitions despite a spate of injuries and he had praise for the off-ice support he's had to get back so quickly. Hear him now by clicking on the link from the home page and watch him in action live on Sunday. Panthers v Fife at the arena at four o'clock. Tickets on sale now. Meanwhile, speaking on Panthers Radio (with Xynomix) GMB Panthers' head coach Corey Neilson said he was pleased with the way his team had come back from the Continental Cup and applied themselves in the league shoot-out win over Belfast. He talked of Panthers playing a decent game adding "we were up, we were down, we were sideways.........but we found a way". Netminder Miika Wiikman stood tall after saving two of Belfast's three penalty shots in the round robin and forcing another over the bar meanwhile Matt Carter snagged the extra point from a 2-2 game in regulation with an exquisite penalty shot at the other end. Hear coach Neilson right now, just click on the link on the right for Panthers Radio. PANTHERS v FIFE FLYERS, Sunday at four o'clock. SEE YOU THERE!