Sell out shirt off his back...Mike Price gets the prize! 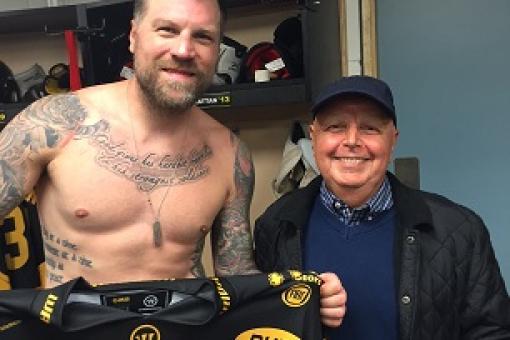 Panthers fan Mike Price was thrilled to meet new Nottingham hero Brian McGrattan in the locker room after winning the shirt of his back raffle draw at the home win over Sheffield. We took Mike right into the room to meet the big guy and he was even able to get a quickly assembled collection of hockey cards signed as well as picking up Brian's debut shirt. The printing run had been set before we even knew Brian's paperwork was going to get sorted as well as his flight details in time for him to debut in the match and a club spokeswoman said afterwards: "The shirt off his back is a new venture for us and that was only its second outing. We massively increased the print run after it proved so popular in its first week, but with Brian getting clearance to join us we thought it would be a great prize to offer. We're still figuring it out with the draw but it is going down well. We'll have another McGrattan shirt up for grabs in the coming weeks and for now we can only thank fans for their tremendous support."