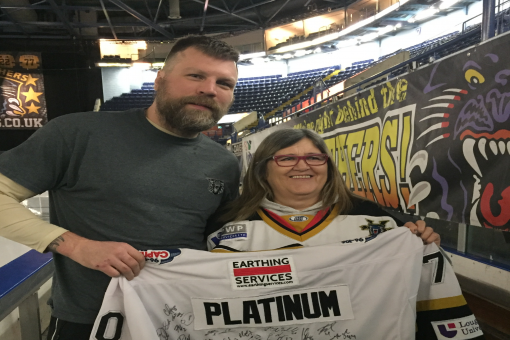 Our partners Eden Tyres and Servicing ran a competition in conjunction with the GMB Nottingham Panthers. They were giving away a limited edition, signed, 70th anniversary jersey for any fans who got involved in their Facebook competition. With over 500 respondents and reaching 50,000 people, it ended up being their most successful post ever. On Thursday, they announced the lucky winner as Sharen Janet Moran, a season ticket holder from back in the old arena, who recently renewed her season ticket for this season. Sharon and Joanna from ETS came down to Friday’s game against Braehead where, in a final twist, Sharon was presented the jersey by her favourite player, Brian McGrattan. Thank you very much to ETS and to Sharon for taking part in the competition; we hope you like your new jersey!