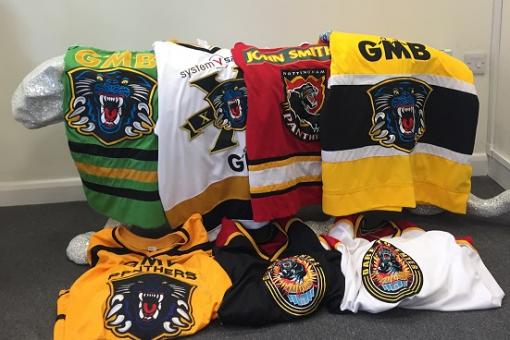 There’s a two-pronged shirt auction on Sunday after the game against Coventry. The auction will be at a new venue, SALTBOX, and everyone is welcome. A set of black game-worn jerseys will go under the hammer. ALSO we have some special “lots” of vintage and unique jerseys and the proceeds from their sale will be added to the fund-raising for the club’s chosen charity HEAD WAY which researches and helps victims of head injuries. A club spokeswoman said: “We’ve had dozens of enquiries about the staging of the ‘normal’ shirt auctions which have proved so popular in the past. Some fans were worried that the new Shirt Off His Back raffles would mean there would be no actual auctions. That’s not the case at all. We’ve just tried to open things up to as many fans as possible with the raffle, again at the fans' request. “This will be the first shirt auction of the season and we won’t be having many. All the players’ shirts are included and the charity lots – from a private collection, some never seen before – include: a GREEN SHIRT FROM THE Grand Slam year, a white special anniversary shirt, a red game worn Superleague Mike Bishop shirt, a bright gold Corey Neilson game-worn shirt, two Dare to Enter logo’d shirts and a never seen before so-called sample shirt in gold mesh with black trim and the number ‘99’ on the back. “Some of these, like all game-worn jerseys are unique memorabilia, and there could be some bargain sales on Sunday. Anyone who can’t get to the auction in person can e-mail a bid on any of the shirts to info@panthers.co.uk, or call the office on 01159413103. We need to know your maximum bid, your contact number, your name and, of course, the shirt you want to bid on. “On the day you can pay by cash or leave a deposit and collect from the office later in the week. The charity shirts can be paid for by cheque, made out to : Headway – the brain injury association “And you don’t to bid at all, if you want to just come and watch the sale in progress at Saltbox after the game next Sunday night!”