Shirt off his Back winner - Danny 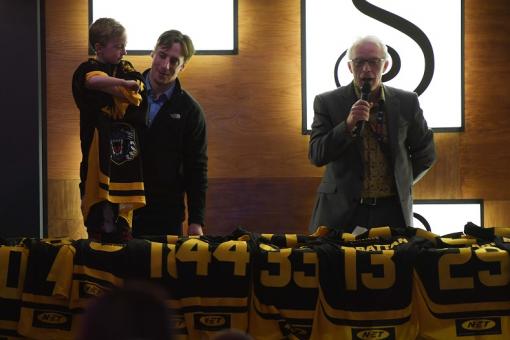 Danny Thornhill was the latest winner of the Shirt Off His Back raffle at Panthers' home games and was presented with his prize by Andy Sertich straight after Sunday's game. Meanwhile, Serts is also pictured at the first gameworn shirt auction of the season where Alex Nikiforuk's shirt topped the bidding. There were some bargains snapped up as well at the event held at Saltbox. More auctions are planned for later in the year and there will be another shirt raffle at Wednesday's home game against Braehead. You could end up winning some unique memorabilia and it's just £1 a ticket! Wednesday's game is the second leg of the Challenge Cup quarter-final against the Braehead Clan. The teams tied the first leg in Glasgow last week 3-3 so it's all to play for with Sheffield awaiting the winners in the semi-finals. Tickets for Wednesday's home game are on sale now and will be available right up until face-off on Wednesday (7.30pm). Call 0843 373 3000, buy on line or visit the box office (open daily from nine 'til nine). SEE YOU THERE!