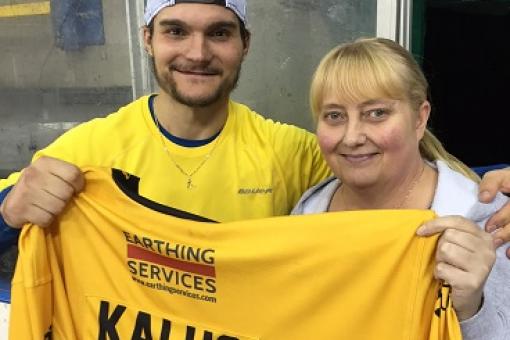 The latest Shirt Off His Back raffle saw another near sell-out as fans joined in the fun to try to win Petr Kalus' game-worn debut jersey. Tracey Dodsley had the winning ticket and was able to get the shirt from Petr just moments after he'd taken it off in the dressing room. There'll be another Shirt Off His Back draw at the next home game next weekend (Sunday) when the Belfast Giants visit Nottingham in the league. There'll also be another big cash prize up for grabs in next weekend's fifty-50 draw AND the new Panthers Yearbook - AT THE DOUBLE - featuring this year's player roster and looking back on last season's cup and play-off successes, goes on sale for the first time ahead of a post-match full team signing session.