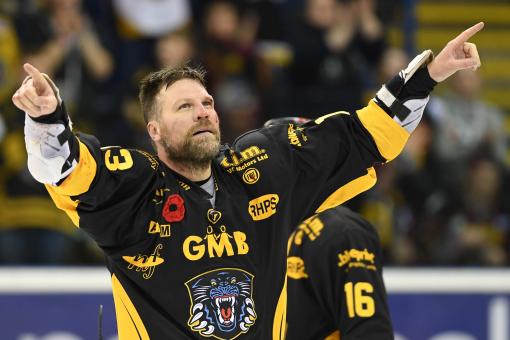 The GMB Nottingham Panthers in association with the makers of the ICE GUARDIANS movie have lined up a special week of showings for just after Christmas. The event will take place at the East Midlands Conference Centre over three nights. The first night will be for invited guests, nights two and three will be public events and tickets will go on sale at Panthers’ next home game. The public showings will be on January 4th and 6th. Brian McGrattan is one of the stars of the movie which is centred around hockey hard men. He will be at the showings along with Panthers’ team mates for a special question and answer session. And to make the event even more special we’re hoping to have a new Panthers’ short film which is being made by an award winning filmmaker in time to make its debut on the same billing. AND we’ll be including a mini-colour brochure free to everyone who attends. Tickets are likely to be in high demand and numbers will be limited. £10 adults £8 concessions. A club spokeswoman said: “We’re planning on making these nights a little bit special and with the tickets going on sale soon we reckon it’ll make a great Christmas present for any fan of sport, of ice hockey in particular and of the Panthers of course. Each night will be a fun evening with some great films to watch and some great chat to listen to.”