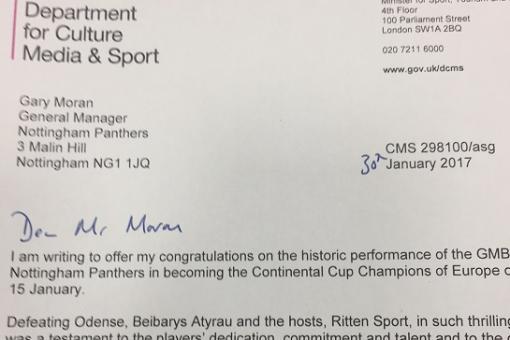 The latest in a long line of messages arrived at the Panthers office today and the Minister for Sport has added her own congratulations to the club for becoming Continental Cup Champions of Europe 2017. Tracey Crouch MP sent a long letter from the Department of Culture, Media and Sport and added a lengthy hand-written postscript revealing she has always been a big fan of the sport including the message: “There is huge potential for growth and your victory will help.” Meanwhile, the final touches are being tweaked for next Tuesday’s big City Celebration of the Continental Cup triumph which will be held in the Old Market Square ahead of the official Civic Reception. There’ll be a stage show with all the players being in traduced and chatted to on stage from 6.15pm. Wear your colours with pride with free hot drinks available from McDonalds and a pound off rides on the wheel in the square. Let’s make some noise and show Nottingham how proud we all are of the club becoming the first team from the UK ever to win a European title! SEE YOU THERE!