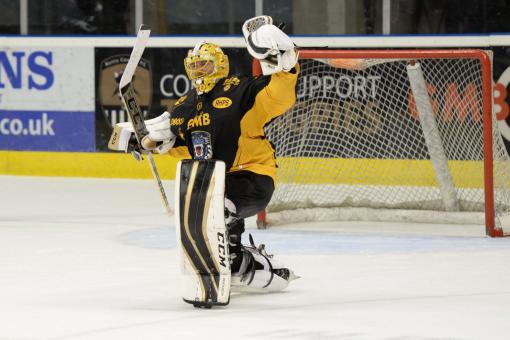 The GMB Panthers faced a daunting prospect last weekend after another successful Continental Cup trip. They welcomed the Belfast Giants, winners of the last two faceoffs between the teams, and the Fife Flyers, who beat the Panthers when they headed to Fife early in the season. Both matches went to the wire as the Giants took the Panthers all the way to a shootout and the Panthers needed until 45 seconds from time to see off the Flyers. You could never say that Panthers games aren’t dramatic! Belfast may have had the better record against the Panthers coming into Friday but they weren’t separated by much in the table. In fact, if the Panthers won all their games in hand, they would overtake the Irish side in the EIHL standings. The first period was an exciting one as not even two minutes into the game, Nikiforuk connected with Brown to give Nottingham the lead. Belfast tied up with 8 minutes left in the period but that was enough time for the GMB Panthers to retake their lead through a tap in from Ollie Betteridge. It took Belfast until the third period to pull back that deficit but they did after a breakaway. It was almost all in vain however as the Panthers got the puck across the line once more late in the third through Robert Lachowicz but it was waived off. This took the game through to the shootouts where Miika Wiikman and Matt Carter were the heroes for the Nottingham Panthers, keeping the Giants at bay and scoring the winner respectively. To see the full highlights of the game, click here: https://www.youtube.com/watch?v=iMXs_qEL1NE Fife was another very exciting affair. The GMB Panthers were flying in the first period, outshooting their opponents 15-7, but they weren’t able to beat an on-fire Shane Owens. Owens couldn’t keep up his heroics much longer though as at 22:56, Andy Sertich managed to bag his first goal as a Panther. Shortly afterwards, Nikiforuk doubled the lead making the Panthers seemingly safe. However, in the space of 10 minutes in the second period, Fife were back in the game and the third period ended 2-2. But once again, the Panthers managed to bag a late goal and this one stood! Nikiforuk doubled his tally for the game and gave the Panthers a very successful 4 point weekend! To see the full highlights of the game, click here: https://www.youtube.com/watch?v=ohEY7IlBZVg