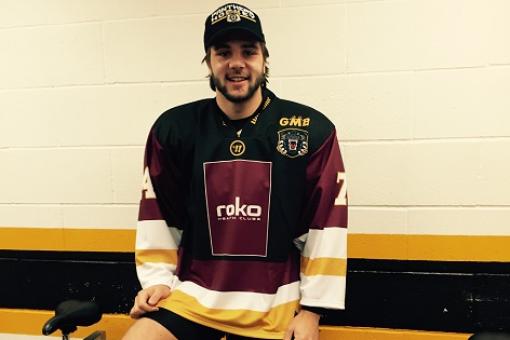 Steve Lee returned from injury to skate on Thursday and Friday ahead of the visit by the Cardiff Devils. The medical team say he will now be monitored ahead of a late decision on his inclusion. Stephen Schultz is making progress and should be back next weekend. Meanwhile he'll be joining the team from Panthers' official health club ROKO in the foyer ahead of the game tomorrow to meet fans for autographs and photos. Most recent signing Brian McGrattan has filed all his paperwork in Canada and everything is with the authorities. As soon as his visa comes through he'll be jumping on a 'plane and heading to Nottingham. Tonight is the first home league game of the new Elite League season. Panthers will be wearing their gold coloured jerseys (one of them will be up for grabs in the new shirt off his back raffle) and before that - as shown with Ollie Betteridge in our pics - Panthers will don the new ROKO sponsored warm-up jerseys. Warm-up starts at 6.20pm, the game faces-off at seven o'clock. Panthers versus Cardiff - always HIGH OCTANE AFFAIRS. Good seats still available but there were less than 1500 available in the bowl yesterday and the box office reports steady sales throughout the last 24 hours. You will be able to pay on the door, be allow extra time. SEE YOU THERE! <><><> The game is sponsored by sponsored by FORBIDDEN PLANET ON FRIAR LANE – first for: COMICS, MANGA, STAR WARS, DOCTOR WHO, FUNKO POPS, AND FILM – TV - SCI-FI MERCHANDISE. There are lots of new things to look out for at this season’s home games such as the new shirt off his back raffle, MASCOT Paws will have giveaways from tomorrow’s match sponsors Forbidden Planet, extra interval bouquet giveaways from Flowervision and more. PANTHERS’ VIP desk, sponsored by East Midlands Trains has moved to LEVEL THREE…that’s one flight of stairs up from the foyer and one flight of steps down from the hospitality boxes. Follow the signs to the Panthers’ VIP desk if you need to see us at the game. The new intro video for the screens is a work in progress and we’ve got more to come in that department too…lots more! Saturday games will again feature the players handing bouquets over the glass to fans during the end of match presentations BUT there’ll be a few extra bouquets handed out in the intervals this year. The main giveaway from the whole team will be supported tomorrow by THE FLOWER SHOP, BEESTON. The new season sees a new look match night magazine on sale at the game for the first time and includes a host of exclusive features, profiles, and columns…including a clutch of new features…including not one but TWO player profiles, called INSIDE EDGE and RELEASE THE BEAST find out all about your favourites and more. It’ll be on sale all around the arena (£3). Our picture shows forward Logan McMillan enjoying a sneak preview of the new magazine. After this weekend’s game the next home action is a week on Saturday against Sheffield in the cup, more top action featuring another big rival. Tickets now on sale. A night with the Panthers can be more than just a visit to a sporting event. The games are staged inside the fabulous National Ice Centre. We have parking deals lined up at the Broadmarsh. It’s cheap on a match by match basis for fans, and it’s cheaper still if you grab a parking season ticket. For more information e-mail parking@nottinghamcity.gov.uk After every home game the Panthers' players will be eating meals from Pizzeria Savai, close to the arena. Fans can use their match tickets or Panthers season tickets to take advantage of a “Buy One Get One for half-price” deal at Pizzeria Savai on game days. Match and season tickets can also be used on the Nottingham trams network to get into the game with £2 return tickets. Adult season ticket holders can get a