Thousands of toys rain down for needy youngsters 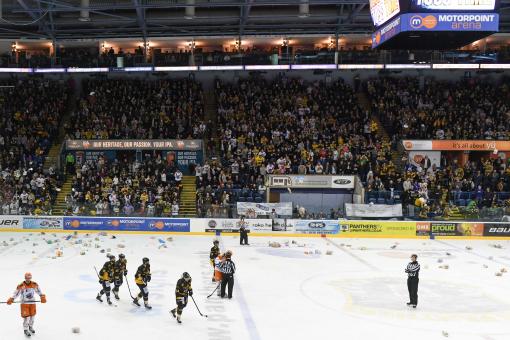 The GMB Nottingham Panthers would like to thank their amazing fans for another night of amazing support. The crowd were behind the team from start to finish in the clash with rivals Sheffield and they supported the teddy bear toss appeal brilliantly too. The Salvation Army have now taken the massive pile of donations to be distributed to youngsters across the city and surrounding areas who otherwise may not have anything at all on Christmas Day. Your generosity never ceases to fill us with pride and appreciation. Thank you. Next up on the charity front we'll be concentrating on raises funds for research and support by Head Way - the Nottingham based charity which examines head injuries. Special shirts will be worn by the players at the home game at Christmas and again on New Year's Eve before the game-worn shirts are auctioned off to raise funds for the charity. The special designs - aimed at encouraging fans to dress up for a grand New Year's Eve trip to the game - will be unveiled shortly. We'll have a limited edition of replica shirts for fans to buy which will pay for everything so that every penny raised at the auction early in 2017 goes to the charity. Next Sunday there's a current jersey auction (at Saltbox) after the game and we'll be adding some 'vintage jerseys' from a private collection. Money raised from the auction of the vintage jerseys will also be going to Head Way. More details soon.