Tickets available for big clash tomorrow - it's the play-offs! 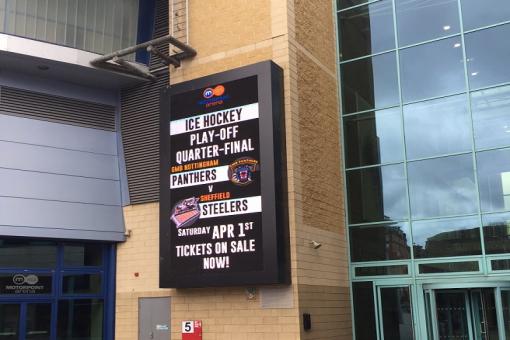 In a rare state of play for a GMB Panthers versus Steelers match we're not ruling out the possibility that fans will be able to "pay on the door" We'd advise getting in early or better still buying in advance as the best seats are selling fast but the rate of sales at the moment would suggest the biggest of rivalries will be available to watch to anyone turning up at the last minute. There’s only one thing bigger than ice hockey and that’s play-off ice hockey and the only thing bigger than play-off ice hockey is Panthers VERSUS Steelers play-off hockey. Ticket sales for the home leg at the arena in Nottingham tomorrow, Saturday, at 7pm were very strong earlier in the week to avoid the pre-game queues you can call 0843 373 3000, buy on line at panthers.co.uk or visit the box office daily from nine ‘til nine.