Trip to Jaca huge success for the GMB Panthers 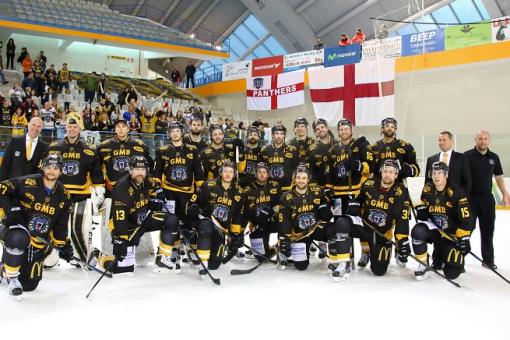 A #3in3 is never an easy task for a hockey team to take on. Add in a day's travelling to the event, the GMB Panthers were facing a tough challenge. The stakes were also incredibly high for the boys from Nottingham, with a place in the 3rd Round of the Continental Cup on the line. In their way stood some unheralded opposition in the form of home team Club Hielo Jaca, Turkey's Zeytinburnu Istanbul and Latvia's HK Liepaja The Panthers had a target on their back from the beginning as the favourites for the round, with each team wanting to prove themselves against opposition of such a high level. Friday evening saw the Nottingham Panthers take on home team Club Hielo Jaca. There was no home side advantage however, as the Panthers were clinical and rampant with an opening game 13-2 victory. Officially there were nine different scorers for the Panthers and the power play units were relentless with five successes on six outings. In fact we believe there were ten different scorers for Nottingham in a game that saw a few first time scorers with the likes on Lindhagen and McGrattan getting their first goals for the club. Saturday afternoon was Turkish team Zeytinburnu's turn to take on the GMB Panthers. Once again, Nottingham were flying as the final score in the Panthers' second game of the tournament was Nottingham 12-1 Istanbul. Henry Pacl was in the nets for the Panthers from start to finish while the Turkish team goalie made a string of excellent saves. Panthers outshot the opposition 37 to three in the first period and led 3-0. By the end of regulation, they had managed 80 shots to Zeytinburnu's 16. While the Panthers had won their first two games in grand fashion, HK Liepaja had also been dominating their opposition. This set up a winner takes all affair on Sunday afternoon; only the victor would move on to Odense, Denmark for the 3rd Round. What was a tense affair saw the Panthers put on a very professional display to come back from behind to seal a 3-1 win. The final two periods saw Liepaja hit 27 shots to Nottingham's 13, but Miika Wiikman was at his commanding best to keep the GMB Panther's two goal cushion. With that victory, a succesful weekend drew to a close and the Panthers could start to plan for three new opponents in the Odense Bulldogs, Angers Ducks and HC Donbass. The 3rd Round will take place in Odense, Denmark from the 18th November to the 20th for any travelling members of #PanthersNation.