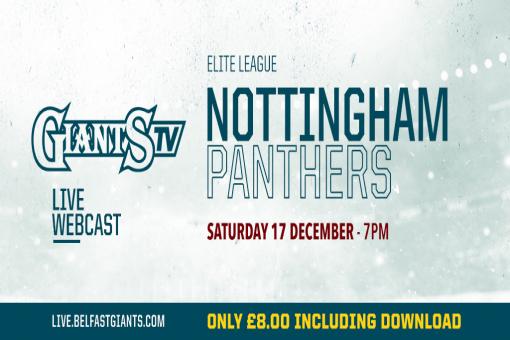 It's another big weekend of Elite League action for the GMB Panthers who take on top of the table Cardiff at home on Sunday at four o'clock. Before that the team makes the round-trip to Belfast to face another in-form team - The Belfast Giants. Fans can hook up with the team in Northern Ireland by watching the live webcast from Giants TV. The n on Sunday the Devils will be looking for revenge after their mauling a week ago in Wales by the Panthers. Panthers and Giants both go into the weekend unbeaten in their last four games. Head coach Corey Neilson said: "It'll be tough we know that, we've got an early start and lots of travelling before we get home to face Cardiff and we know they're gunning for us, but it's sport, it's ice hockey and it happens. The guys trained hard today and they know what's going to be needed and we have confidence and a good mood in the camp." Panthers are expected to ice the same line-up as on Wednesday when they knocked Braehead out of the Challenge Cup to progress to the semi-finals. Warm-up for the weekend by checking out the highlights of Wednesday's cup win on Panthers TV with the GMB. Tickets for Sunday's game are on sale now. On-line, at the box office and from 0843 373 3000.