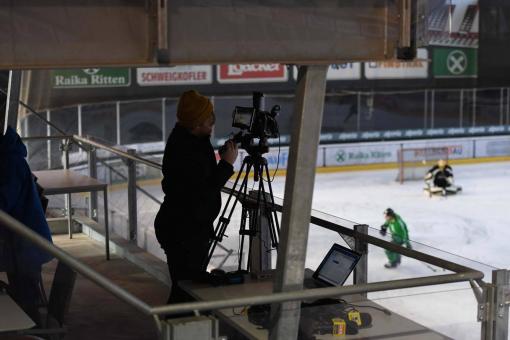 The GMB Panthers are unveiling a webcast this weekend for all our fans who are unable to join us in Italy. Today was their first chance to test camera locations and the internet speed at the venue and there was some good news for the crew. They had been informed that there would be good facilities for the broadcast but one member of the media team described the internet as ‘space age’. “We had been told that the internet and filming locations would be good enough for a webcast but they really undersold themselves. “So far the entire setup has been very smooth and we’re excited to bring a really high quality product for the fans who can’t join us over here. “Hopefully they enjoy the whole experience as much as we will.” With the final testing going so well David Burnham of Visionmix Productions, who's running the webcast from Italy said " we should be able to have the games available to download within an hour of the game ending and we'd like to have a goal roundup on social media in that time too." All in all it should be a great weekend of hockey whether you're at home or in Ritten so don't miss out! Remember you can watch the GMB Panthers attempt to make history, by being the first British team to win the Continental Cup, through our webcast on: http://nottinghampanthers.tv/