Weekend reactions from the coaching staff 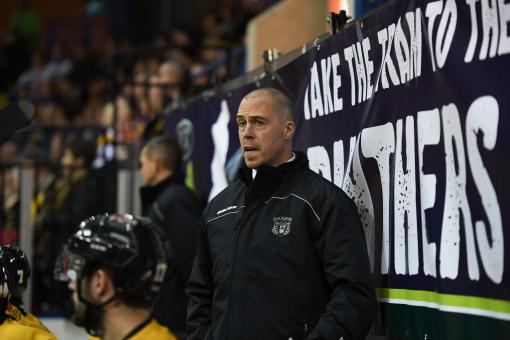 GMB Panthers coaching staff were happy with the results after over 900 miles of travelling for three games in four nights ended with four league points and a first leg tie in the Challenge Cup. After a round trip to Glasgow on Thursday for a 3-3 tie in the first leg of the cup quarter-final the GMB Panthers started the weekend with an amazing eight goals to nil shut-out success at top of the table Cardiff on Saturday before returning home to face big Midlands rivals Coventry at home on Sunday afternoon. Panthers had to dig deep for a penalty-shoot-out victory (6-5). Speaking on Panthers Radio (with Xynomix) head coach Corey Neilson spoke of a great team effort, admitting it wasn't pretty on Sunday but he was pleased his team had eventually got the job done. He singled out Matt Carter for playing a big part and doing so through the pain barrier and he also gives special mention to netminder Miika Wiikman. Meanwhile, on Panthers TV with the GMB, bench coach Rick Strachan also praised the players for never giving up despite tired legs on Sunday and ultimately "getting the result we wanted". Hear them both - just click on the links on the right.