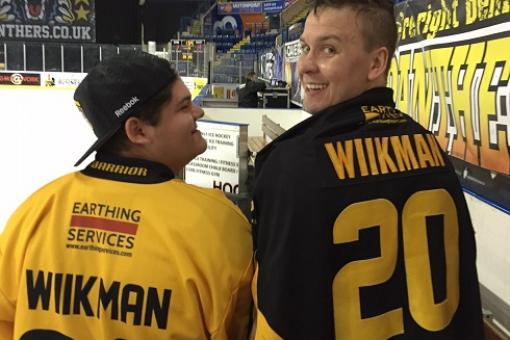 The latest shirt off his back raffle prize was Miika Wiikman's shirt from the game against Belfast and the winning ticket was held by one of Miika's biggest fans. Jake Woodland had already bought a replica shirt bearing Panthers' Number One Goalie's name and number. Now he has an actual game-worn shirt to go with his collection! The next Shirt Off His Back draw will take place at the home game against Edinburgh on Saturday October 29th. Panthers are away in the Continental Cup next weekend. Tickets for the upcoming games between Panthers and Edinburgh and also Great Britain v Norway (Tuesday November 1st) are on sale now from the box office (daily nine 'til nine) by calling 0843 2373 3000 or you can buy on line from the link on the home page.