Wiikman "stiff and concussed" but “it could have been worse” 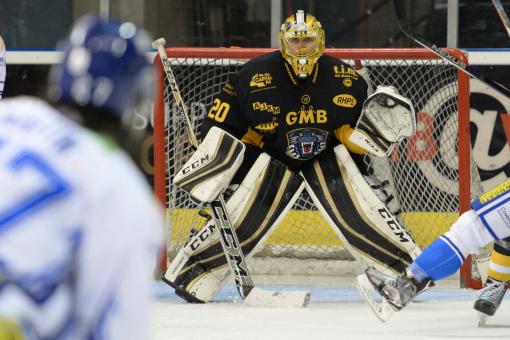 Miika Wiikman is recovering at home after he was knocked unconscious during Sunday’s game at Sheffield. Steelers’ player John Armstrong was sent off for the challenge which left Panthers’ number One knocked out on the ice. Medics fearing a broken neck or spinal injuries strapped Miika to a back-board and placed a neck brace and immobilizing straps on the player before he was carefully lifted onto a stretcher. He was then transferred to hospital by ambulance where detailed checks were carried out. There had been a lengthy delay to the game while the medical teams, including Panthers’ own physio, rightly took every precaution. Once the hospital tests had shown no serious spinal or neck fracture Miika was checked over again and eventually allowed to leave hospital. He returned to Nottingham and is now with his wife and two small children who’d witnessed the whole incident on the ice. Miika’s still suffering today with stiffness through his neck and back coupled with the head injury. He would have been ruled out for a minimum of two weeks with the injuries he's suffered but it could have been a lot worse. In the game Steelers went on to recover a two goal deficit from the time of the incident and go on to win the tie in overtime.